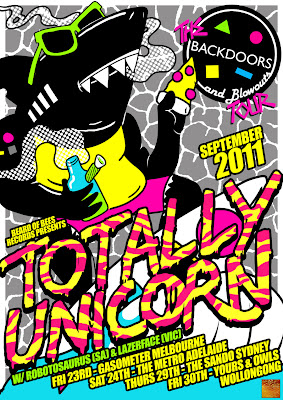 To celebrate the up and coming release of their new film clip for 'Cool Dads With Cool Sons', TOTALLY UNICORN are headin' south on a 4-show whirlshit tour this September through your backdoor and out that bottom bit of Australia with ROBOTOSAURUS* of Adelaide and LAZERFACE from Melbourne.

Supporting the party jerks at Yours and Owls will be gameboy enthusiast "10,000 Free Men and Their Families" with live wall art by Baker & Ox. This hometown show is set to be the highlight of "The Backdoors and Blowouts Tour" and with only 50 tickets released for sale, it is guaranteed to sell out.

Tickets for this one-off show are just $15 and available for presale at Yours and Owls from September 1, SO GET IN QUICK!!

TEN THOUASAND FREE MEN & THEIR FAMILIES
Ten Thousand Free Men & Their Families started making music with Game Boys as a joke. Sadly, over time it became very serious. Now Tom is stuck with a silly name for what turned out to be his favourite project. He is in the Business of CA$H MONEY!
Ten Thousand Free Men & Their Families is a political figure who yells at Nintendo Game Boys and calls it music.
LISTEN
http://10kfreemen.com
http://myspace.com/10kfreemen
http://twitter.com/10kfreemen