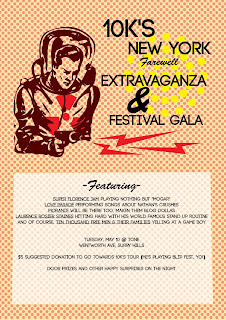 Two Upcoming 10k Free Men shows before he heads off to show Americans what's up down under!

10K'S NEW YORK FAREWELL EXTRAVAGANZA AND FESTIVAL GALA
An event name as long and epic as 10k's full moniker,
• super FLORENCE jam playing nothing but "MOGAR"
• Love Parade performing songs about Nathan's crushes
• Moranis will be there too, maken them blog dollas
• Laurence Rosier Staines hitting hard with his world famous stand up routine
and of course...
• Ten Thousand Free Men & Their Families yelling at a Game Boy