In case anyone wants to hear a full length preview of my track for the Bit Shifter tribute comp... here it is.

Remember that all profits from sale of the Reformat compilation will go to Japan earthquake and Pacific tsunami relief via the American Red Cross.

"Propelled forth from the forgotten abyss of yesterday’s future is Blip Festival NYC 2011. Co-presented by 8bitpeoples and The Tank, Blip Festival showcases the best creations in art, music, and culture using retro game and computer hardware at Manhattan’s Eyebeam May 19 – 21, 2011.

Entering it’s fifth year, this iteration of Blip Festival showcases an international chip community that stands at a crossroads. Now firmly entrenched in mainstream culture with chipsounds and pixel art finding their way into television, motion pictures, and ironically enough, modern video games, Chip musicians and artists find they are no longer expected to educate their audiences but, instead, are free to innovate. As the community becomes less of a genre and more of an ethos, documenting the ever-growing diversification of the community is the Blip Festival’s top goal." - via blip website


Quite possibly the worst videos ever (because they don't have me... no kidding they are really terrible I suggest thinking of them as abstract visuals or just listening to the audio which is actually pretty good)

thanks heaps to Douglas Craig for being more interested in dancing his arse off than filming... GOOD ONYA!@|!@!
Posted by Unknown at 6:50 PM No comments:

Paul "gentle-egg" Eggins has uploaded a video from the weekends Soundbytes 8 gig in Melbourne. Featuring, Pselodux, godinpants, Dot.AY, 10k, Cheapshot and cTrix. The sound distorts a fair bit but captures the mood of the gig nicely. Also you can read my tour blogs for a round-up/summary/review of all the recent chip events here.
Posted by Unknown at 3:35 PM No comments:

Something I filmed, which the boys ended up using. The compilation features Dr. Chiptune (little-scale) as well... Awesome.

Above is a video I knocked up from the night. Thanks to godinpants for shooting some footage of me.

There are some other great clips floating about that other punters shot, including this: 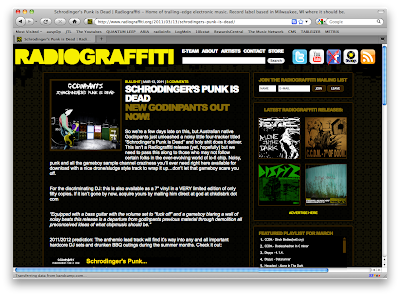 "Godinpants just unleashed a noisy little four-tracker titled “Schrodinger’s Punk is Dead” and holy shit does it deliver. This isn’t a Radiograffiti release (yet, hopefully) but we need to pass this along to those who may not follow certain folks in the ever-evolving world of lo-fi chip." 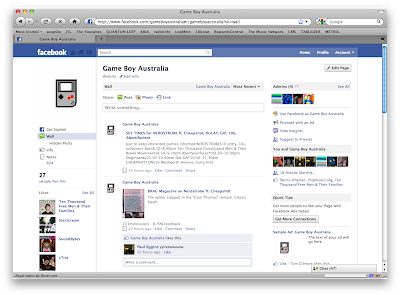 Email ThisBlogThis!Share to TwitterShare to FacebookShare to Pinterest
Labels: lol?

The editor slapped in the "Cool Thomas" remark. Classic Steph.
Posted by 10k at 9:15 AM No comments:

If you're in Brisbane, head to Pocket Music tonight. If not, listen to some live tracks from the headliners on 4ZzZ FM between 2-4pm Brisbane time (GMT +10).
Posted by 10k at 12:25 PM No comments: 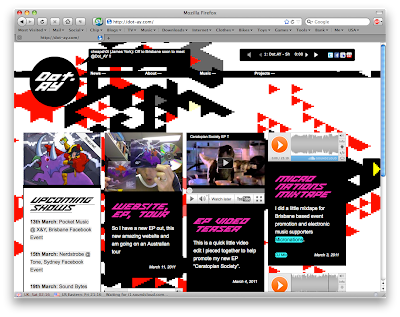 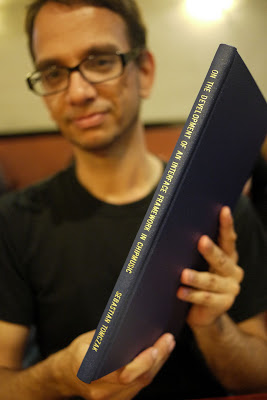 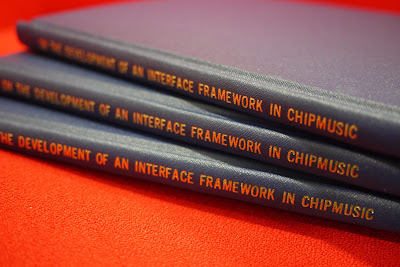 Swoon some more over at Seb's blog.

Email ThisBlogThis!Share to TwitterShare to FacebookShare to Pinterest
Labels: little-scale, Must Read

Just another way to follow what is happening with chip in Australia.

http://twitter.com/GameBoyAus
Posted by 10k at 1:10 PM No comments:

with love and support from Sydney's
10kfreemen and Abortifacient.

More on the artists:

"James York a.k.a. Cheapshot a.k.a. Yorkie a.k.a. better at dubstepwobblebasschipfunk than you has been tearing up the Tokyo live scene for the past year with more fans than a top seed gladiator. This EP is part of the reason why. Dark and gritty, instantly accessible, and hard to forget. Phone home and tell your mother, Cheapshot has arrived."

• 10kfreemen yells at a Nintendo Game Boy and calls it music.

• Abortifacient spends more time painting his face in corpse paint than writing tunes. His Game Boy centric tunes are still great despite this. 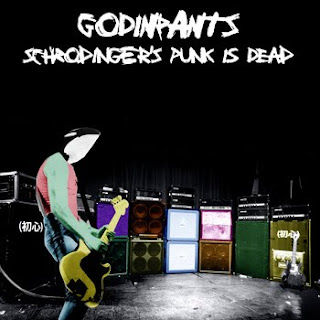 New EP from Sydney's godinpants is trupunk download it now or preorder vinals or get from one of the upcoming festies!!

"godinpants, the fruit born of the unholy union of a japanese whaler and a great blue whale, has decided to release upon the world the brutality that is the "Schrodinger's Punk is Dead" EP.

Equipped with a bass guitar with the volume set to "fuck off" and a gameboy blaring a wall of noisy beats this release is a departure from godinpants previous material through demolishing all preconceived ideas of what chipmusic should be.

Available on bandcamp at name your own price.

This release is available in a limited run of 50 7" records, available at godinpants shows and online. Email god at chkdisbrk dot com for more information. Prices should be roughly $20 for international, and $15 within Australia.

Featuring:
- NO ARPS
- NO UNCE
- ONE PITCH BEND
- NOTHING FROM THE SABARPLUS TUTORIAL
- A GAMEBOY
- THREE PARTS PUNK
- ONE PART DRONE"

The headliner for SoundBytes 8 is an absolute highlight of the live chipmusic scene in Tokyo.
His music is dark and gritty, and full of bass so heavy, the airlines are going to have issues with luggage restrictions when he makes the trip here from Tokyo.

The lineup, of course doesn’t end there, and we have some of our most crowd pleasing artists filling out the lineup. Interstate favourites, 10K (SYD), godinpants (SYD) and dot.AY (BNE) will be making their way to town, and both godinpants and dot.AY have new EPs, so plenty of new tunes for your listening pleasure. We also have local talent from cTrix, and a newcomers to SoundBytes Pselodux, who you may have seen at one of his many shows around the local traps and local democene heavyweight Raor bringing some evil amrigacore to the mix.

Get yourself along to ladida on 18/03

$12 on the door, $10 presales.
Talk about how excited you are in this thread.