"First up, a huge thank you to all who turned up to the party, and particularly to all those who participated in the competitions.

Allowing remote contributions to the competitions will continue to be a feature at future Beach Party events, so if you're interstate or overseas with few local parties or you just have an experiment you wish to unleash on a bunch of willing sceners, keep us in mind!

For those of you unfamiliar with the rules of Beach Party, we had a bonus system in place. The bonus system was so that the barrier to entering a compo is quite low (ie. videos or flash demos in the demo compo), but also so that traditional demoscene and oldschool productions are encouraged and rewarded."
- Quoted from the results page.
Results can be found here! (I can second in the Chiptune comp mofrockers!)
Posted by 10k at 3:31 PM No comments:

Email ThisBlogThis!Share to TwitterShare to FacebookShare to Pinterest
Labels: Melbourne

OK so this kind of slid by all our attentions, I believe because so much has been going on. Game Boy Australia has been online for a Year since the 18th of March. A whole lot has happened in a year and this year already is shaping up to be huge.
To celebrate head over to this page to download sets from 10k, Derris-Kharlan, Maddest Kings Alive and Jim Cuomo from the most recent Sound Bytes party. Astro was there too (proof).
I also played a gig on Saturday and made some awesome contacts, so have more shows and a VJ lined up in the near future. So lets hear it for the one year old Game Boy Australia and hopefully this second year I will finally release something worth listening too.
Posted by Unknown at 4:15 PM 2 comments:

(Taken from a thread on 8bitcollective. Abrasive is one of the DPAD boys in Melbourne.)
James developed a script that takes an LSDJ ROM, and rewrites the tuning table (and optionally the note names) into a new copy of the ROM. Frequencies can be manually specified (all 108 notes), or generated in equal temperament, cent steps, cent series or ratio series.

The latest version of the script (works with LSDJ 3.9.9) can be found at
http://bur.st/~abrasive/lsdj_tune/

Jim Cuomo started using computers when the operators had white coats and the
computer took up several floors.  After composing a variety of different music - jazz, classical, musical, military ... he was asked to write music for video games in the 1980's . The result was a long list of popular games :
Defender of the Crown, Sim City, SlamDunk, Ole, Jigsaw, International Cage Match, S.W.A.T., Zombie, S.D.I., Serenade, Astarte, Expressing etc
Then he began getting messages in 2004 "Are you the Jim Cuomo who wrote ...?"
and "Are you still alive?" and then "Would you be interested in performing with your
classic game music?" Yes to all three.
He uses the Amiga (1985) the Oric (1983), the Canon X-07 (1982) and the IBM 7090 (1967!?!).
This concert at the 303 in Northcote is his first in Australia - after thousands elsewhere.
He will perform music from several of his ten albums-on sax, digihorn, zaphoon, and clarinet.
The music is from his games but also from groups he has created over the years -
Spoils of War , Mormos , Duoglide , Ejazz, and SignificantBits.

His saxophone has been featured with Marianne Faithfull, Yves Montand, (new Australian) Leo Sayerand many many more.
Posted by 10k at 7:53 PM No comments:

little-scale: always by your side (1) 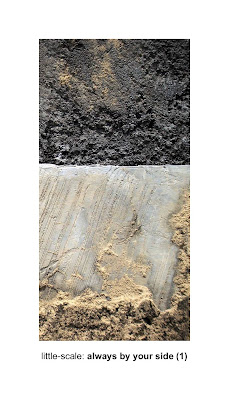 "A minimalist approach to Sega Master System music.
For Lauren." - little-scale
Posted by 10k at 8:49 PM No comments:

"This is just a short 5 track release that i've been working on recently - i hope you guys like it! let me know what you think." - Raptorface

Get it into you now!
Posted by Sebastian Tomczak at 8:13 PM 1 comment:

Friday the 27th of March will see the return of the successful SoundBytes chip shows!

This is set to be something quite special as we have confirmed Jim Cuomo from U, S and A. Along
side Jim will be SoundBytes veteran 10k as well as Maddest Kings Alive, Derris-Kharlan, Astro
Zombies as well as the Slurry Beats Collective throwing down DJ sets between live acts.

There will also be an ABC film crew who will be reviewing artists and taking footage for a chiptune
segment on ABC2's popular all things gaming show "Good Game".

Peep the flyer below and see you all there!

10k will be playing tonight at the Abercrombie Hotel!

In other news he'll also be playing SoundBytes Round 3 in Melbourne on the 27th of March...
We'll keep you posted with more details and a flyer once it's done.

In the mean time make sure you get down to the Abercrombie Hotel tonight to peep the man himself.
Posted by Celsius at 10:19 AM No comments:

Beachparty 2009 is a demoscene get together on the beach featuring demos and competitions for music, graphics and coding.

Everyone is invited to enter the competitions, however it should probably mentioned that the rules push the focus towards older/classic home computers and the sounds and sights that can be produced on them.

Anyone with an interest in computers/consoles new or old is welcome. We are not elite and this is open to all!

Beachparty 2009 will be held over 2 days this year.

* Sat 28th MAR, Day 1: A hang out day with bbq. Bring an entry and receive a sausage and a beer!
* Sun 29th MAR, Day 2: Competitions will be held, voting, winners and prizes.
Remote entries are allowed, send them to beachparty@disasterarea.net.

All remote entries MUST be received the day before beachparty 2009 (27/3/09). Otherwise, you'll have to be there in person on the first day - this is the best way because you'll get a snag and a beer!

Posted by Unknown at 4:26 PM No comments:

Email ThisBlogThis!Share to TwitterShare to FacebookShare to Pinterest
Labels: Melbourne

Godinpants on 8bc Open Mic Podcast!

Godinpants is featured in the latest 8BC Open Mic Podcat episode, put together by Silreq.

"This time "Godinpants" brings us an improvised nanoloop breakcoresque poodle swooning set, not to mention it was controlled and triggered using a bent toy guitar. We begin by debating the pluses and minuses of an ass-beard. Robot is a bit on the angry side because of a close encounter with a goat. . .err sheep actually, and we end the episode with some fake gabba, so have a listen and respect yer goat. . ." 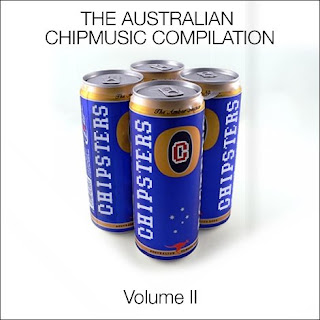 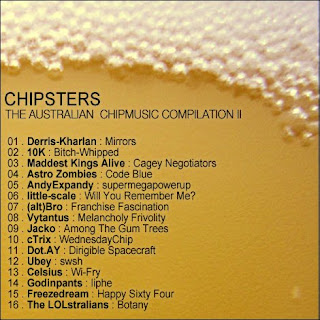 This time around there were a total of 16 tracks that made it onto the list.

It can be downloaded here

Big Thanks to Astro Zombies and little-scale who were both instrumental in the organisation and execution of this release.

So get on it and enjoy!

The artists reserve all rights in regards to any audio content published in this release.
Posted by Celsius at 7:45 PM 1 comment:

This Sunday 8/03/09, I will be performing a live set as well as playing a bunch of my favourite Chip Music on Brisbane's finest independent Radio Station 4ZZZ, 102.1 FM.

It will be from 8-10pm (AEST) on the Forcefed Fistfuls show. Previous guests have included

so I am really pumped to play on a show mostly dedicated to Dubstep, Grime and BASS...but for this week the whole show is going Chip and Game inspired, I will take requests to play any of my songs or any Chip song you think should be played via the comments.

OK so I assume most of you keep up with the wonderful little-scale blog but in recent times there has been a whole lot (as always) going on so here is a quick recap
do yourself a favour and just subscribe to his blog :D
Posted by Unknown at 12:47 PM No comments: