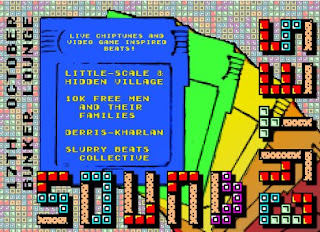 Just a quick into :

The names Eugene, aka Celsius and I was asked by 10k and co. to get on board with GBA recently. I reside in Melbourne Aus, like long walks on the beach and all that shit.

I recently had the pleasure of organising a gig that all went down on the 17th of October 08' called "Sound Bytes".


The premise was to bring all the cool 'internet peoples' to Melbourne and do a show. I'm pleased to announce that it went smashingly well.

Derris-Kharlan warmed up the place with an epic set of shredding guitar riffs backed by his JRPG style beats which got a great reaction from the punters. The head nod was in full effect as he played "Luna" which is to be released on his forth comming album "Seraphim".

We heard an amazing sets from little-scale (solo set) and later when cloud sparrow joined the party to complete the duo as Hidden Village. Theory of a Black Hole was definitely a highlight for me and also star gazing at the spaghetti junction of cables laid out connecting a Sega Master System, a pair of Gameboys, various pedals and all sorts of other electric magic boxes.

When 10k Free Men and Their Families leaned over the console and yelled into my ear with a glint in his eye "I'm just gonna play for as long as I like yeah? Like... 6 hours yeah?" I knew that the LOLs were just beginning. The crowd lapped it up like a dog lapps up the recently vomited dog food as a second helping. After what seemed like 60 different versions of "Happy Birthday" 10k butchered "Stairway to Heaven" with a Gameboy cover to the punters delight followed by a remix of DOT.ay's "Education" which saw 10k raving on the top of the sub like a lunatic and the rest of the venue jumping up and down like epileptics having a collective seizure.

Cid (aka Andrew) and myself teamed up as The Slurry Beats Collective and kept peoples ears bleeding in between live acts with DJ sets of some chiptune classics, generally bopping about like morons in the hopes people would laugh at us and remain entertained long enough as to overlook our non existent skills.

I had such a ball hanging out with Seb, Lauren, Tom and Nathan and am salivating at the prospect to another gig really soon.

It looks like something may be on the cards for late November so keep your ear to the ground.

Massive thanks go out to all the artists that put their time and money into the trip to Melbourne and a special thanks to Cid and my girlfriend Kristy who I would not have been able to pull it off without.

Here is a pic of myself djing in front of Super Mario Kart that we set up on the projector for the patrons.

good to have you on board man!

I call Tas, as I lived there and my brother still does.
and the other two are freak states. Swearrrz.

We should do a Tas gig actually.