CAG flies under the radar and seems willing to do so. His music does no such thing however. He has a unique and recognisable sound, with hypnotic loops and few elements in his works. Somehow he makes things seem uncluttered. His melodies are infectious without leaving the foul taste of "s00per happy shit-tune" in your mouth.

This album is going for the bargain price of free to download, so get on it.

Also, if you head to his myspace page you will find a number of other releases that should not be overlooked. You will also note some awesome pixel art, which he is also responsible for.

Little-Scale: Versus The Nation

This is a remix EP of some Australian chip music. The audio of each original track was used as source material. This release is licensed under the Attribution-Noncommercial-Share Alike 2.5 Generic Creative Commons license.

Seb has done it again, done something I never saw coming. The atmosphere he has created on this release gives back the IDM feel to chiptunes. He has slowed down the tempos and upped the threshold on the chip-as-a-medium-and-not-a-genre scale. I just don't have the words. Download this now people. As a note, the original songs can be found on artists' respective 8bc pages, links were provided above. 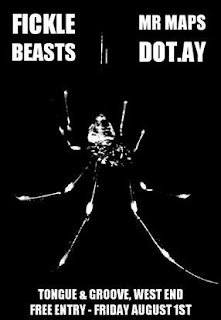 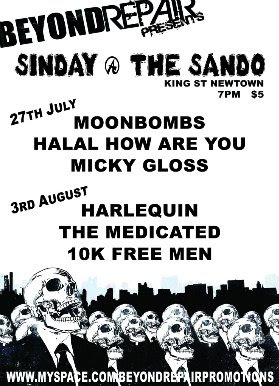 I have just been informed that the 2PlayerProductions film "Reformat The Planet" has been accepted into the Melbourne International Film Festival! It will be screening at 9:30 PM on Monday, July 28th at "Kino". This will be the overseas premier of "Reformat The Planet" and we should consider ourselves blessed! First we had Marcin's 8bit in Melbourne, then Glomag in Sydney for This Spartan Life, now this! The Australian scene is being blessed from the get-go.

"Few people would consider an original Nintendo or Gameboy console as a musical instrument, but for an emerging culture these are the tools for producing something unlike anything heard before. Called ‘ChipTunes', this inventive spin on electronic music takes grainy beats and 8-bit samples to create a retro-futuristic sound, equally at home in 80s sci-fi as on the dance floor. Paul Owens' documentary introduces us to the major players in the ChipTunes movement, focusing primarily on the New York scene and covering Manhattan's Blip Festival, where the world's best 8-bit artists get to strut their stuff."

Email ThisBlogThis!Share to TwitterShare to FacebookShare to Pinterest
Labels: Videos

In an earlier post I wrote about Little-Scale's latest releases, including "Red, Yellow and Orange". This release has been given much praise within the 8-bit community, particularly on 8bitcollective. Not only is this release free for download, but now Seb has also released the LSDJ save file for the three songs!

What an awesome opportunity to learn about LSDJ functions! To open this file on your computer, you will need to first, download the .SAV from here. Then, download either the demo of LSDJ from the official Little Sound DJ website or go nuts and buy the full version, which we here at Game Boy Australia happily reccommend. Then, create a new folder on your computer and place the LSDJ ROM inside it, then add the .SAV and rename it to have the same name as the ROM file. Then open the ROM with your favorite emulator (if you do not have one try VisualBoyAdvance) and select "Open Save File"...

Remember, this is a tool for learning, don't be lame and release his music as your own. I am sure Seb would allow people to remix his tracks, but remember to ask for permission and credit him if it is given the okay to release.

Finally, thanks for being so awesome, Seb. You are putting Australia on the map in the world of chip. People of Australia, enjoy his work.

Email ThisBlogThis!Share to TwitterShare to FacebookShare to Pinterest
Labels: "How To", Releases

A State of Emergency!

All I can think about when it comes to Australian Chip music these days is Sydney's one man noise onslaught Emergency! Emergency! (aka Stephen J Mitchell). I recently went to see him in Brisbane for the third time when he was supporting indie-guitar-noise band Stature:Statue. The crowd was all there to see guitar bands and so were quiet taken aback by Stephen's setup of Laptop, Microkorg, Loop-Pedal and Game Boy...and he relished in it. The more confused the crowd got the more frequently the beat would change into a mash of noise and screams. I enjoyed the hell out of it and even though it isn't strictly Chiptune music who cares? Emergency!Emergency! is everything bands like Crystal Castles should be, the Game Boy supplies one shot samples from games like Batman and Kirby in a way that it sounds like they were made for the song. The thing that makes all this exciting is Stephen is very interested in the Chiptune scene and will very soon be hooked up with his own Game Boy music cartridges (courtesy of 10k/Tom) so he can incorporate more original Game Boy sounds into his songs. In my eyes Emergency! Emergency! is the perfect cross over to pull Chiptunes into broader national exposure within Australia. So please check out his music page and buy the debut EP and keep an eye on the remix page for individual remixes by Tom and I...

Email ThisBlogThis!Share to TwitterShare to FacebookShare to Pinterest
Labels: Artists

*GIG POSTPONED DUE TO VENUE ISSUES*
Will post details here when I hear them...

Where: Town & Country Hotel, St. Peters: Corner of Campbell Rd and Unwins Bridge Rd. Sydney, New South Wales AU.
Cost: Free.
The Rest: It’s a pretty small venue, low key sorta show but should be a few people there. Get there at 8 to see everyone play! The nights lineup in order playing first to last (and with myspace links): The Medicated, Ten Thousand Free Men & Their Families (me), Noogat.

Little-Scale : 'Red, Yellow and Orange'
This release is a set of three tracks Seb wrote for a gig at our favorite Adelaide venue - The Deli. The release is only a single mp3 file, and it flows amazingly. Seb describes it as "some straightforward, laid back Game Boy music - nothing more, nothing less."
Click here to download it now.

0xFFender : 'GBIsland'
If you want to hear someone mess with the sounds a Game Boy can make, listen to this is all I can say. This kid looks hard to find the glitches and exploits them until your ears explode. He is young and is always the centre of a flamewar on 8bc, the crazy kid - these are but two valid reasons to check his music out! (ha!) I feel that his online personality and his songwriting style rubbing people the wrong way is no coincidence - I am pretty sure he is in it for the lolz.
Click here for a link to a download page.

I promise Alex is writing something for this blog soon. He has just been a busy little bee.